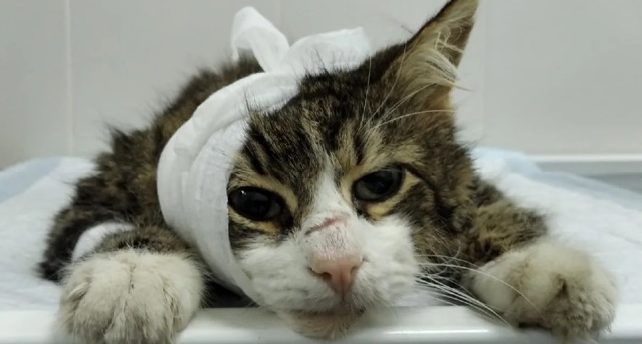 This cat appeared in the yard of a high-rise building many years ago. When he was first spotted here, he was just a kitten who had found a warm place to sleep in the local basement. The residents of the yard nicknamed the cat Vaska.

Vaska lived quite well. Local kids got used to him and did not hurt him. Adults often fed him. And in the basement it was warm in winter and cool in summer. From other cats living in the yard, Vaska was distinguished only by his character. The cat was extremely hot-tempered and often got into fights, not infrequently acting as their initiator.

Vaska was indifferent to local residents. He had friendly relations with only one woman who lived in an apartment on the second floor. When the woman was sitting on the bench, the cat settled next to her and kindly allowed her to stroke him. The woman also sympathized with the cat and often gave him treats. 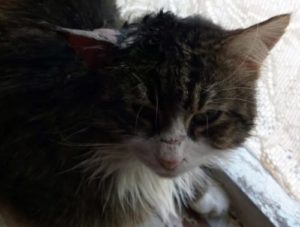 A couple of days ago, Vaska’s mood changed. He became sad and withdrawn. The cat, as before, was sitting on the bench, but did not come close to the woman and did not allow himself to be petted. After a while, the cat stopped jumping on the bench and only looked at his nurse from a distance.

A couple of days ago, when the woman came home from the store, she saw Vaska, but not in his usual place, but just at the door of her apartment. The woman did not know how the cat knew where she lived, but it was clear that he came for a reason, and hoping that the woman, who had always shown kindness to him, would help him this time.

After taking a closer look at the cat, the woman realized what had influenced his mood in recent days. Getting into another fight, Vaska came out of it with damaged ears. 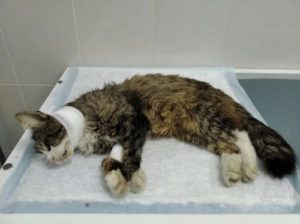 The woman could not afford to pay for the vet visit on her own, so she called volunteers. It was obvious that Vaska did not like the idea of going to the clinic. But when they put him in a carrier, he accepted his fate.

The doctors immediately issued a verdict – to cut off what cannot be sewn on and to sew up what can still be saved. Within an hour, the doctors had fixed the cat’s ears and neutered him. Among other things, the doctors prescribed dressings and injections for the cat to recover.

The cat could not live on the street after the operation. That is why he was temporarily taken in by his breadwinner, who promised to take care of him. 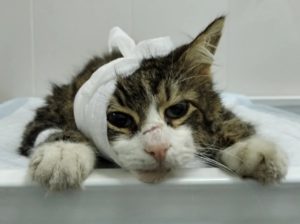 Vaska did not want to accept his situation, and as soon as he was home, he took off all the bandages. However, a few minutes later he was bandaged up again by the skilful hands of his owner.