It is unknown what happened to the mother of these six puppies, but they were orphaned. The helpless little ones were saved by a street cat, who could not leave them in the lurch and began to take care of the puppies, getting food for them and raising the babies.

So the pups wouldn’t starve, the cat caught mice and birds for them, washed their faces in the morning, protected them from other stray animals and didn’t let them get hurt. The cat took care of the puppies until the volunteers found this unusual family in the woods.

The cat, the guardian of the puppies, led the people to the place where the puppies lived. When the cat noticed the people near the tree line, he started screaming loudly. And when he managed to attract people’s attention, he did his best to make them follow him. The situation was so unusual that the volunteers did not immediately realize that it was the cat that took care of the puppies. The cat turned out to be a wonderful caregiver: the babies were not hungry, were not sick and were relatively clean.

What is interesting, female cats often adopt other creatures’ babies, but for male cats, this behavior is very atypical. At first, the volunteers thought that it was a female cat who had adopted the puppies, and were surprised when they realized that it was a male cat. 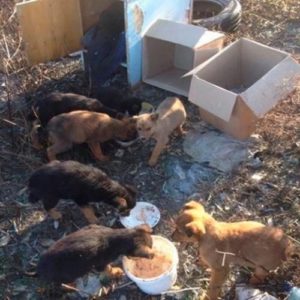 It was still warm outside, so a kennel was set up in the woods for the puppies and the cat, and they were regularly visited and brought food. When the temperature began to drop below freezing, the entire family was taken from the forest to a warm house built for dogs. Immediately the cat inspected the new house and his eyes were quite skeptical. Only after the cat had seen everything he wanted, did he allow the puppies to come inside as well.

The puppies were growing and gaining weight very quickly. When they were small, they slept on the cat, and this habit has remained with them. Except that they had grown big and could now unintentionally hurt the cat. Volunteers decided to take the animal and give it its own place. Even when separated from the puppies, the cat came every day to visit them. Except that he no longer went hunting, because he knew that his pups were well fed and he did not need to get mice and birds for them. 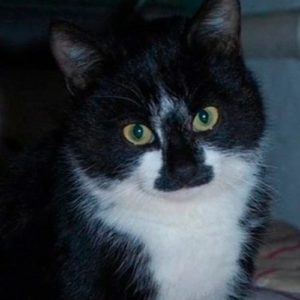 New families were quickly found for the puppies. When everyone was given away, the cat got sad. He walked around the shelter looking for his pups. They also started looking for a home for the cat and soon a man came to meet him. As it turned out, the man and his wife had recently lost a cat that was very similar to the one the volunteers found in the woods. The new owner fell in love with the cat at first sight. In the new home, the cat was named Marquis and lived a happy, quiet life. The new owners never saw the cat hunting. He must have done it so often in his time that he decided to rest.