A cat named Annie had lived in the family for two years. She came home to her owners when she was only two months old. The family took her from the animal shelter. Everyone was very fond of the gentle and playful cat, so they took care of her. 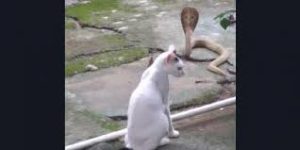 The skinny little cat gradually grew and eventually transformed into a beautiful cat. One day Annie showed all her courage and devotion to her family. She protected her owners from a poisonous cobra, which she unexpectedly discovered in the yard of the house.

The cat protected her home from a deadly snake by keeping it out of the house. The reptile hissed and lunged at the pet. But brave Annie stubbornly continued to defend her territory. She arched her back, snarled menacingly, and clamped her tail. For more than half an hour the fight lasted until rescuers arrived on the scene and caught the snake. The cobra returned to the forest, and Annie became the heroine who deserved the most delicious lunch.