If people were endowed with the same sensitive heart and were half as kind as this child, our world would be a much better place. There is no evil in this child at all, if he could, he would help all people and animals on this earth.

Video with the boy was filmed on the streets of Grozny. The boy’s name is Ibrahim and he was caught in the camera doing one of the most selfless and beautiful things a child can do. On his way to school, Ibrahim encountered stray dogs on his way to school. Thinking no one could see him, Ibrahim walked up to the animals and started hugging them. 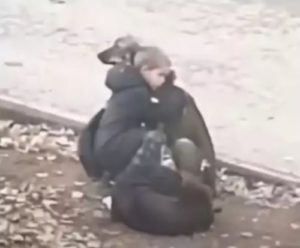 The boy was about to leave, but then he turned around and hugged the dogs one more time to say goodbye. The boy’s family friend, noticing the scene, immediately took out her phone and started filming what was happening. The woman says it was one of the most touching moments in her life. When this boy grows up, he will definitely become a good person.

Ibrahim expressed so much love and tenderness for stray dogs that most people would rather just ignore. The boy didn’t think others would find out about his act; he was convinced that no one would see it. His action was dictated only by his good heart. 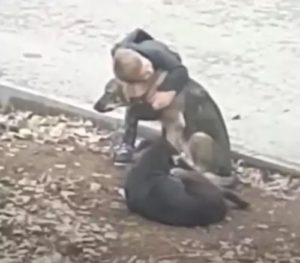 The video quickly went viral online, and Ibrahim won the hearts of people all over the world.

«This is Ibrahim, he is my daughter’s classmate. He often helps her carry a heavy briefcase. He’s a beautiful and kind child,» the woman said of the hero of her story.

«Our world would be a much better place if we could preserve the ability to see it through the eyes of a child and love it the way a child’s heart can,» wrote one user who viewed the video.