Since they can’t find an apartment because of the dog, 63-year-old Eberhard and his wife Magda J (70 years old) they’ve been living in a car for a year now. The back of the car is stuffed with clothes and things. Therefore, the couple is forced to sleep sitting in the front seats. 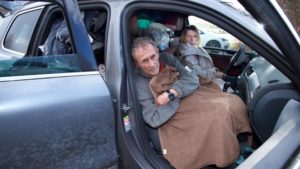 Because of mold, two years ago, Eberhard and Magda moved out of the house they rented

“Inside it smelled like a corpse was decomposing in our basement,” the man says. The owner of the house refused to do anything. The couple sued the landlord and achieved a reduction in rent. Six months later they were evicted. For a year, Eberhard and Magda lived in holiday apartments with money from insurance.

“We didn’t want to apply for Harz IV. We thought we could handle it,” says Eberhard, “but then the money ran out and we ended up on the street. Renting a new apartment or house was an impossible task. The problem is an 80–kilogram fighting dog, Cinn (4 years old), who has already become a member of our family.” 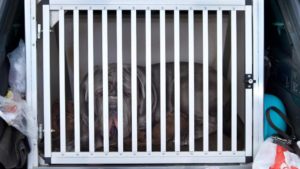 During the year, the couple contacted more than 50 landlords. But all of them refused to rent housing to people with a dog. The spouses live on social benefits of 780 euros per month. Most of the money goes for fuel and a dog. Cinn eats two kilograms of feed a day plus meat rolls.