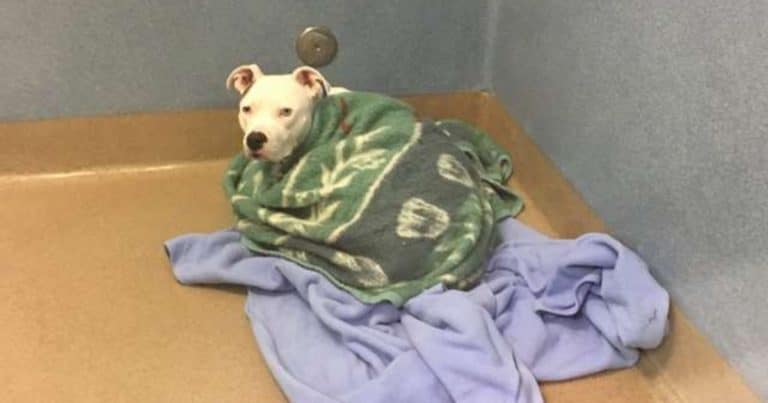 When people look at this cute pit bull in the kennel, they immediately notice something very unusual! The young dog wraps himself in soft blankets to warm not only the body, but also the soul…

The half-breed pit bull named Valkor is three years old. Take a look at his charming muzzle and you will see bright blue eyes and a great desire to give love!

The pet was born deaf, and his only consolation was everything soft and fluffy. Alas, but human affection was never enough for the baby.

He was recently taken to a shelter in Wildomar, California. The former owners advised the employees to immediately give the dog a blanket so that he could wrap himself up in it.

Since the pet is deaf, the warmth and softness of the fabric seems to soothe him. He curls up under the blanket and falls asleep. The baby sleeps until someone touches him or he decides that it’s time to play.

Why was such a charming dog handed over to a shelter? A child was born in his former family. And the owners decided to abandon the animal, referring to the fact that the dog began to fiercely protect the child from everyone around and could not in any way share the territory with another dog living in the house.

The shelter staff feared that the animal was really very aggressive. They gave him a “dog test”, introducing him to other pets. There were no problems. Valko made friends with absolutely everyone! True, he made funny noises that the other dogs didn’t understand. But it is common for deaf pets.

Valkor loves it when elementary school students come to the shelter, practicing reading skills next to the residents of the shelter (a great idea, it’s worth noting). As soon as the dog sees the children, his behavior changes. He’s starting to glow with happiness! The kid loves to play with them and will not miss the opportunity to cuddle with the guys.

The staff of the shelter is very fond of Valkor. They sincerely hope that there will be loving owners for him who have a child.