An unusual rescue was captured on video.

Experienced diver Brett Johnson was accompanying a group of tourists on an underwater trip to the Cayman Islands that day when he saw an incredible sight.

On the bottom under an overhanging reef they spotted a shark whose head was pierced with a large knife. 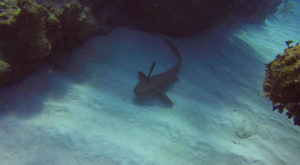 «During another dive we saw a meter-long nurse shark, clearly injured at the hands of man. A 30-centimeter kitchen knife sticking out of its head eloquently testified to this.
The shark was lying on the sand. At first it looked like it was just resting, as some shark species do. But then we noticed that something incomprehensible was sticking out of its head.
When the predator saw us, she swam toward us and began to make unnatural movements.
When we swam closer to the shark we were shocked to see a knife stuck in its head. It was very unpleasant to see.
One of my diving students videotaped the incident.» 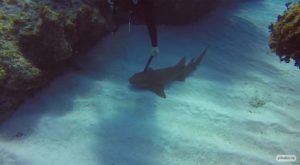 The 30-year-old diver-instructor said the shark was not dangerous, so he immediately decided to act to save the poor animal.

«At that moment the shark turned and stopped right below me,» Brett recalled. It looked at me as if asking for help.»

Johnson began to swim slowly toward the wounded shark so as not to frighten it away. Then he gently removed the huge knife from the shark’s head without touching its body.

The grateful shark swam in front of the camera, revealing the huge wound the knife had left in its head. 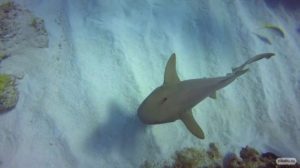 The nurse shark is a slow and non-aggressive predator that is quite malleable. This type of shark is often found in the Caribbean Sea.

Nurse sharks are considered non-threatening: predators do not attack people if they are not provoked.

They feed on small fish and bottom dwellers. They have powerful jaws that are used to crush shells of clams and coral.