Every year from June 21 to 30 in the city of Yuilin, China, there is a gruesome summer solstice festival during which some 10,000 dogs and cats are killed and then eaten.

China Animal Protection Power and Humane Society International have been campaigning for years to stop this cruel and inhumane practice. 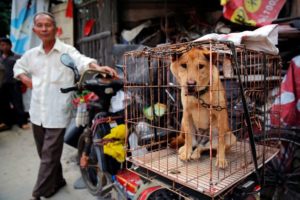 On Monday, June 20, a large-scale operation with local police rescued 385 dogs from a truck headed for the slaughterhouse.

The poor animals were kept in horrific conditions in tiny wire cages. They were found in grave condition, dehydrated, with numerous injuries and infections . Some dogs wore collars, indicating that they had been stolen from their owners.

Members then arranged for all of these dogs to be moved to NoToDogMeat shelter. 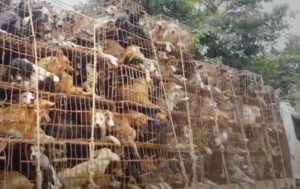 The NoToDogMeat reported that a pregnant dog who was nearly killed for meat gave birth to three cubs in good conditions.

The unhappy, frightened and exhausted dog gave birth a few hours after being rescued.

“The thought that these innocent lives were saved fills us with joy,” said Mr. Zhao, manager of NoToDogMeat shelter in Hebei and Beijing. The mother and her children are now in good hands. Volunteers are caring for and reassuring the animals.

“We are working hard to make sure all these babies get the help they need, because they have been through a difficult ordeal and need treatment. They are safe now,” Zhao said.

At the end of the 21-day quarantine, they may be available for adoption.