The story happened in the winter. A car stopped outside the medical center, the door opened, and a little red dog was dropped off on the sidewalk. It desperately tried to jump back into the car, but its path was blocked by a shoe. A few seconds later, there were three puppies on the sidewalk. After that, the car door was slammed shut and they drove away. 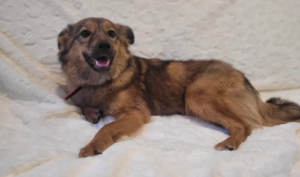 In a panic, the dog tried to gather her babies together to get them away from the road. All this was seen by patients of the medical center, who told about the incident in social networks.

It was extremely cold at the time. The doggy was lying near the curb and feeding her pups, while shivering from the cold. They stayed there until it got dark, until we became aware of the situation. 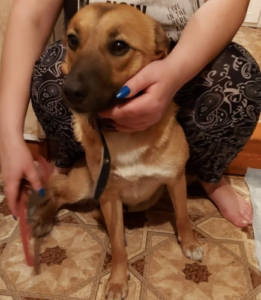 We took the doggie and her babies into the house. There we warmed them up and fed them.

Mom followed her puppies around the room, not believing her happiness that they really were rescued.

By the next day the adorable puppies, who are a month old at most, were happily playing and running around the house. And their mother was still warm near the radiator. 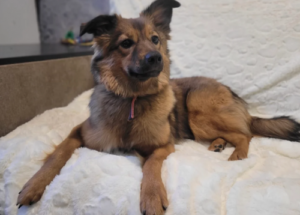 The time the babies spent out in the cold was enough for one puppy to be treated in the hospital. The others were not as badly affected, but there were problems, too.

Seven months have passed since then. Two of the girls have found their homes, but their third sister and mother are staying with us for the time being. For some reason no one notices them.