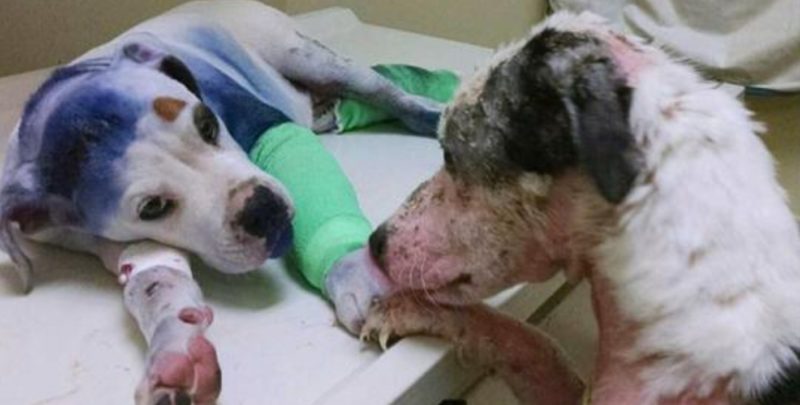 Getting into a shelter is not an easy task for any dog. They don’t know where or why they’re here. They don’t understand why there are so many other dogs around them.And who are they friends or enemies for them.

Dogs that have been mistreated are especially difficult in a shelter. They don’t know who they can trust, and they won’t get hurt again. A puppy named Sammy found himself in this situation. The poor puppy has been through so much. But fortunately, a dog named Simon was there to help and comfort him.

A photo of puppies comforting each other taken at the Rescue Dogs Rock NYC shelter has gone viral.

The two dogs were rescued a few weeks apart, but they soon became friends.

A three-month-old boxer puppy named Sammy was shot and then spray-painted. The poor puppy suffered from injury, as a result of a gunshot wound. He had a broken bone and needed a skin graft. After Sammy arrived at the animal shelter, Simon, a border collie, immediately befriended the puppy.

The sleepy parrot snuggles up to his owner and tells him everything that happened during the day
Pets are incredibly cute and funny creatures. They think of people as their family
ANIMALS 0 10