A pet father from Ituporanga, Brazil, feared the worst when his sweet dog, Safira, disappeared from their home.

The puppy seemed to have disappeared without a trace, and after several days of searching, her father fell into despair.

But then, on the third day, he was finally able to find her after hearing her bark calling for help.

Unfortunately, this ordeal was far from over. 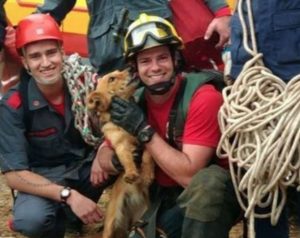 Safira fell off a 200-foot cliff about a mile from home and got stuck on a small, leaf-covered ledge about 80 feet down. 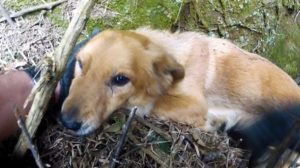 The ledge saved the puppy’s life, but now she was trapped on it, unable to get out to safety.

Safira’s owner was deeply concerned about her health and safety and didn’t know what to do.

Safira was stuck without food or water for three long days, and he had no way to get down to the ledge and rescue her.

In desperation, he called the fire department, though he worried that they wouldn’t want to spend their manpower and resources rescuing the dog. But there was nothing to worry about: the Ituporangi Military Fire Department was more than willing to help save the innocent dog’s life and quickly dispatched a team of firefighters to the scene. 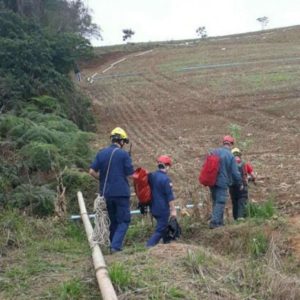 The rescue was not easy. They had to rappel down a rope from a steep cliff to reach the frightened pup, but once they got her to safety, there was no doubt that it was all worth it.

Despite her weakness after the ordeal, Saphira couldn’t help but glow with joy and gratitude and willingly covered her rescuers with kisses. She never seemed to be able to stop kissing and thanking them.

In an interview with The Dodo, one of the rescuers, Luis Fernando, said this was not the first time they had been asked to rescue a puppy, and added: «It’s always worth our time.» 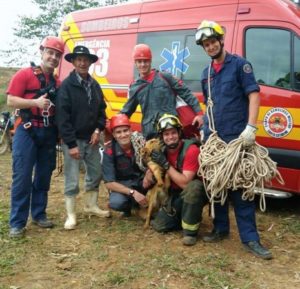 Safira’s beloved dad was extremely grateful to the fire department and beyond thrilled that his sweet little girl was back.

She is now safe, happy and healthy and will no doubt always love and remember the heroes who saved her life.

The rescuers were praised online for their bravery and respect for all living things.