A dog named Polly was once a common stray animal. One day she gave birth to three puppies under her front porch. One day the dog and her babies were noticed by Anna, the owner of the house.
The woman felt sorry for the animals and decided to take the whole dog family into her house. She fed the doggie and took care of her cubs. And when the puppies grew up, the woman found them good owners. And she decided to keep Polly because she loved her so much. Polly quickly became part of her family.

Several years had passed since then. And suddenly Anna saw a little kitten in her house, which was following her dog Polly. 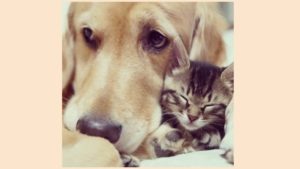 Anna had not seen the kitten before. She thought the baby had lost its mother, so it ran into the yard. And judging by its behavior, the kitten thought that Polly
his mother.

The kitten had probably awakened the doggie’s maternal instinct, and she remembered that she had her own babies. She began to take care of the kitten, which named Simon, as if it were her own baby. 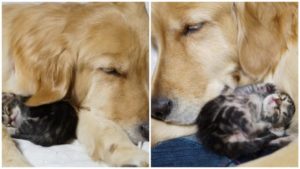 Whenever Polly lay down, Simon would run up to her and playfully cling to her as if to hug her. Polly didn’t mind at all. Now they’re so connected, as a mother and her baby can be.