A spaniel was found dumped on the side of the road with her head laid on a plastic bag filled with her dead puppies.

The dog, who seemed to have “tears in her eyes,” was licking the dead puppies as she tried to bring them to their senses by the side of the road in Meadville, Lincolnshire. The mother and her pups were found by cyclist Paul Skinner, who described the scene as “heartbreaking” and said the dog seemed to be crying over her loss.

Paul approached the dog and found it was carrying its dead puppies in a plastic bag. The three-year-old dog’s name is Charly. In the plastic bag, oddly enough, were the remains of her puppies.

‘I was out cycling with my friend at the time,’ said the 58-year-old Tory councillor for Boston Borough Council. ‘We spotted on the verge something that looked like a dead bird, but as we passed it it moved.

‘It was a small spaniel without a collar. We looked around in case anyone was in trouble. It was set back quite a long way from the road.

‘The dog was on its own, sitting licking the contents of a fish and chips carrier bag.

‘The bag contained four dead pups. It was heartbreaking. She had tears in her eyes. I could not believe anybody could be so devoid of humanity to do something like this.’ 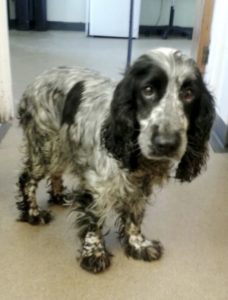 We would like to thank the cyclist who found the dog and raised the alarm, as well as the Fen Bank Greyhound Shelter who took her to the vets.

Fortunately, Carly turned out in good health and is now being well cared for.