Chantel Grant and her husband live in a private home in Minnesota, USA. There are a lot of wild ducks in their neighborhood. So many that if the couple forget to close the back door, they soon find members of the feathered fraternity in the house. Chantel is very fond of these birds, and has already become the unofficial savior of ducks in her neighborhood. And all because as soon as any of them is in trouble, the woman immediately rushes to the rescue. The ducks are always stuck somewhere, and Chantelle helps them get out. And then she drives around looking for the flock and lets the rescued birds go free. One day a bird even laid a few eggs near the Grant couple’s house. The mother was diligent in incubating them, and in due time the chicks began to hatch. Schantel excitedly watched the emergence of new life. But one day she returned home and saw neither the duck nor her babies in their former place. It was like they had evaporated! There was only one egg left in the nest. Someone probably scared the mother away, and she thought it best to save most of her offspring.

The woman drove all over the place looking for the family, but she couldn’t find any. In the meantime, a little chick hatched from the egg. 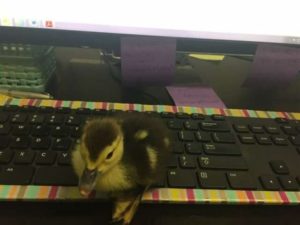 Chantel called several wildlife centers. But they all gave the same answer. Since the duck is an invasive bird species, it will have to be put to sleep. Unbelievable!

There was no way Mrs. Grant was going to let that end for the duckling. So together with her husband they decided to raise it on their own. The unusual pet was named Petunia. Now it is already a big duck. She has her own bedroom with a sign on the door that reads, “Watch out for the guard duck!” The bird is allowed to move around the house, both on her paws and wings. She loves to bathe and cuddle with her owners. 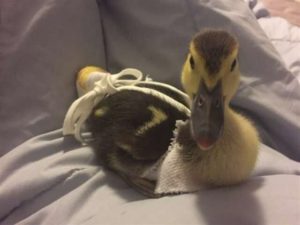 There are also two parrots in the house who hate each other but adore Petunia. Sometimes Chantel even takes Petunia with her to work in a law firm, which makes all her colleagues very happy. 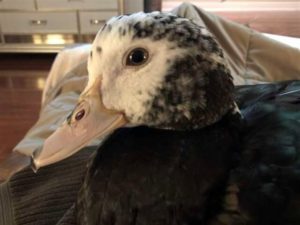 If the woman cannot go with the duck, she stays at home and patiently waits for her beloved owner. But when she returns, the whole show begins.

Petunia shows with all her appearance how she was waiting for her owners and how she missed them. She wags her tail vigorously, nods, flicks her beak and hoots. This can be seen, perhaps, only when performed by a dog.