Hedgehogs appeared under the tree by our window. I noticed the prickly family quite unexpectedly. I leave food under this tree for the street cats, who come to our yard every day after sunset to eat. One evening I noticed that there were hedgehogs eating from the bowl I had left for the cats. One of them was a big one, the rest were babies, so I thought Mom had brought her babies for dinner. The hedgehogs paid no attention to me, continuing with an appetite for cat food. From that day on, besides food for the cats, I began to bring food to the hedgehogs, who quickly became tame.

When I heard the rustling of the bags, the prickly family came running toward me. The hedgehogs’ diet was no different from what the cats and dogs ate, but I put a separate bowl for them, hiding it better in the bushes.

That night I brought food to my charges and was about to leave when I heard a kitten crying nearby. I went around the yard looking for the animal, but no one came to my call. I decided that I had heard a kitten squeaking in one of the apartments, so I went home.

The active rustling under the window started in the morning. Both my mother and I heard it. When I went outside, I saw a family of hedgehogs. They were sitting near the bowl placed for them and were watching a little kitten eating from it. When he saw me, the black and white baby was frightened and went behind the mother hedgehog, as if expecting her to protect him. I thought that the hedgehogs themselves showed the kitten where the bowl of food was, since he was obviously new to the street and could not get his own food yet.

The behavior of the hedgehogs surprised me, I had never encountered these animals before and did not know what they were capable of. The hedgehogs were not at all afraid of the kitten. Then I found out that there was an adult cat among my homeless animals, with whom they became very friendly. 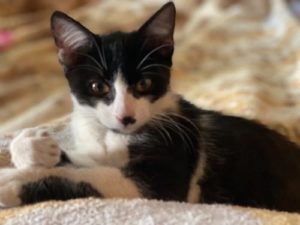 When I picked the kitten up from the ground, it didn’t object, but instead clung to me and began to purr loudly, while the hedgehogs, meanwhile, proceeded to eat their dinner, finishing the food left in the bowl.