This cat settled in the yard of a high-rise apartment building a long time ago. The locals first noticed the animal as a little kitten, and that’s when he was nicknamed Vaska. The cat lived with other stray animals in the basement.

Residents of the house fed the cat and did not expel him from the basement, so he lived quite well. Vaska was different from the other inhabitants of the yard, for his cocky nature.

Vaska befriended only one of the local residents. When a woman came out to sit on the bench, Vaska ran and sat down next to her, waiting to be petted. The woman thanked the cat for this affection with treats. 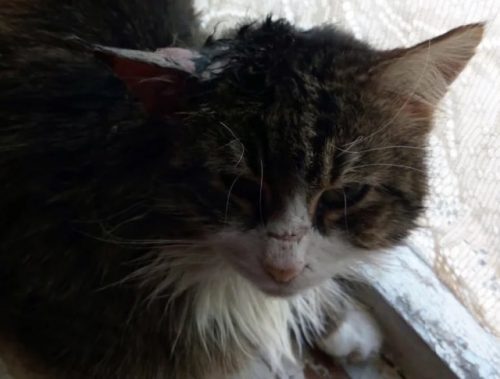 A couple of days ago the cat’s behavior changed. He sat on the bench with a sad look, but did not come close to his acquaintance. And then he moved away, watching the woman from the other side of the yard.

A few days later, the woman saw Vaska again. This time the cat was sitting at her door, waiting for her to return from the store. By some special instinct, Vaska guessed which door his breadwinner lived behind and came to her for help.

What changed the cheerful animal’s mood was evident upon a cursory examination. Vaska got into another fight and suffered some damage. 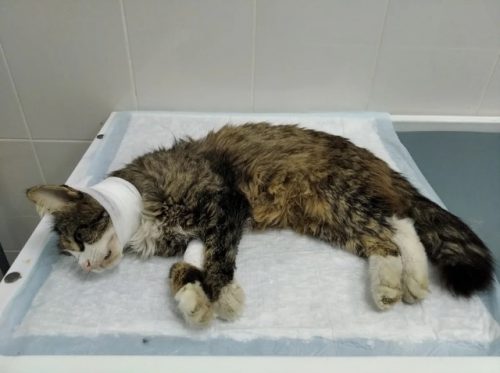 The woman asked for volunteer help. Although the cat was not very happy about the idea, he allowed himself to be put in a carrier and bravely survived the examination at the vet.

Vaska’s wounds were stitched up and he was neutered. The animal also needed bandages and injections.

After the operation, a kind woman took Vaska to her house, as the animal would have had a hard time on the street with battle wounds. 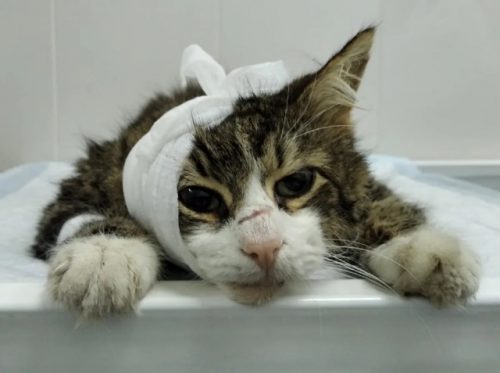 The first few days Vaska was indignant about being bandaged. The cat wriggled around as much as he could and removed the bandages. But he was immediately re-treated and bandaged. So after a few tries, the animal relented.