Fisherman Andy Hackett caught one of the largest goldfish in the world in Lake Bluewater, located in the French Champagne. According to Gismeteo, citing the Daily Mail, the fish weighed over 30 kilograms.

The fish Hackett caught was called “Carrot” because of its orange coloration. It is a hybrid of leather carp and koi carp, which were introduced into a French reservoir 20 years ago. 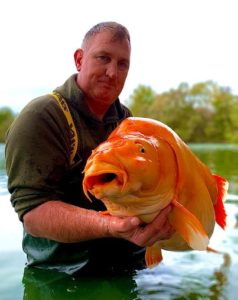 It took about 25 minutes to pull the fish out of the lake, and the individual was the second-largest hybrid of the two carp species ever caught.

The man knew the elusive fish lived in the lake, but he didn’t think he’d be able to catch it. He admits that it was more “pure luck” that helped him catch his prey.

Hackett took a picture with the Carrot and then released it into the water.

To catch such a big and rare fish is truly the pinnacle of success for a fisherman like Andy: congratulations!