A young family living on the outskirts of the village decided to get a dog. What they needed big, formidable, but kind dog. They thought of settling him in an aviary outside. 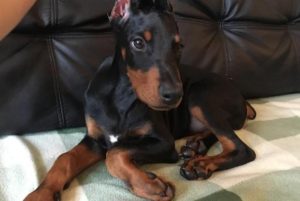 Leaving their one-year-old daughter with the nanny, the young parents went to the kennel. And there, almost at the first minute, they chose a black Doberman. He was very friendly and they liked him immediately. The Doberman named Khan was moved to a new home. One sunny afternoon, the family decided to have a picnic in the backyard. Khan ran around the property and hunted for insects. The girl laid out a blanket, got food out of the bags, but forgot the cutlery. And leaving her sleeping daughter on the blanket, she went into the house to get the cutlery. 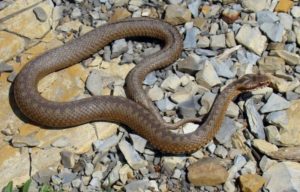 At that moment Khan noticed a snake nearby. He ran up to the girl and poked the baby with his nose. But she was asleep and did not react in any way. He ran around her several times, gently took a diaper in his teeth and tossed the girl a meter behind him. 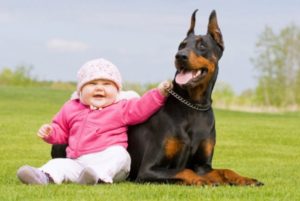 A brown snake bit Khan’s paw. The girl ran up to her daughter and took her into her arms. And the young man unhooked the snake from the dog’s paw and threw it away. Then he picked up the dog and took him to the hospital. 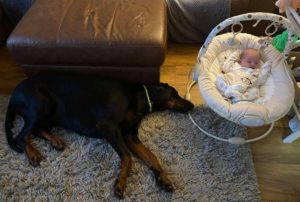 The doctors said they were on time. And after the medical services, the Doberman was completely healthy. When they returned home, the dog rushed to the nursery to check on the baby. From that day on, Han got his own place in their daughter’s room. And the aviary remained empty.