In the yard of a five-story building, near the basement, a cat was sitting in a cardboard box, strangely tucking its paw under itself. It was noticeable that her paw was injured. The kitty was dirty and hungry. And, to all appearances, had spent more than one day on the street.

A resident gave her some cat food, which she avidly ate, paying no attention to anyone. The man thought that maybe the cat was lost and posted a picture of her on the Internet, writing an ad. But the owner was never found. But Pauline read about the cat. Seeing the picture of the cat, she decided to help her and went to the address indicated on the Internet. The girl saw a kitten curled up lying in a cardboard box.

At home she fed it and barely gave it a bath. She noticed that not only was the cat’s leg injured, but she also had problems with her spine. Either she had been hit or she had fallen out of a window. 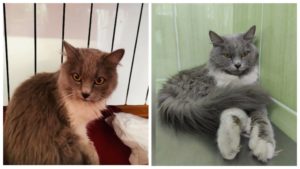 After seeing a doctor, an ultrasound, and an X-ray of the vertebrae, the vet said that surgery was necessary.

Kind people helped Polina raise money for the surgery. A brave kitty cat, named Alice, endured the surgery, after which Polina continued her medical care as recommended by the veterinarian. 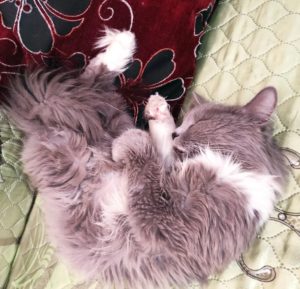 The sweet and affectionate kitty, thanks to the girl’s efforts, was on the mend and and soon became healthy.