A koala named Billy was found sitting in a tree in the backyard. Everything around him was burnt out from the fire. When people took the koala out of the tree, he made a pathetic sound and immediately curled up in his carrier, as if he knew he’d been rescued.

Billy was taken by Lucy and Adam Francis, who are rescuing and rehabilitating injured koalas. The animal was badly burned on all four paws. 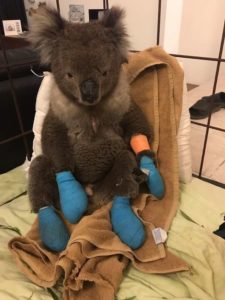 He was taken to the vet, bandaged, and then taken home to recover.

“Because his paws were bandaged, he couldn’t climb or be in the regular koala enclosure. So we had to build him a little cage right in our kitchen to be near him at all times,” says Lucy Francis. – We put a camping mattress under him and a pillow in the back so he could lean on it. After all, Billy couldn’t sit in the usual koala position. He was obviously in a state of shock, frightened and covered in black ash from the fire.” 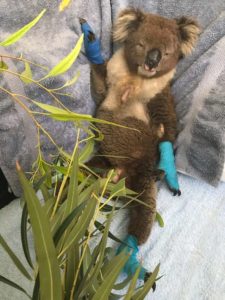 Billy is rather large, and Lucy and Adam feared that he might behave aggressively. Besides, he was obviously not in the best of spirits. However, it quickly became apparent that Billy’s temper was very gentle.

“When Billy first came to us, he could have bitten my husband’s hand if he had a heavier temper, but he just sniffed and licked it,” Lucy says. – He gets a very close relationship with us. He lets us do all the necessary procedures and is very trusting even though he is 100 percent wild koala.” 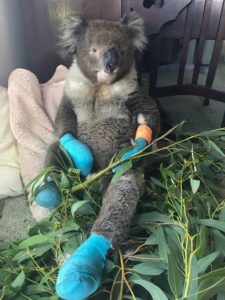 At first Billy was so weak that he couldn’t even eat properly. He was given vitamins and special supplements to speed up his recovery. Now he has gained strength, and his rescuers can’t be overjoyed. 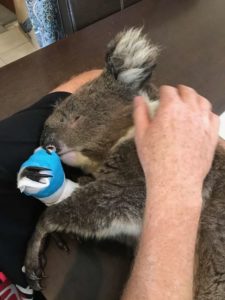 It will be some time before Billy is released. But for now, he’s relaxing in a safe environment. Of course, it would be a blessing for him to be back in freedom. But his guardians say they will miss him.

“We can’t wait to see him fully healthy and release him to the big, lush eucalyptus. But we’re going to miss him a lot,” Lucy says. 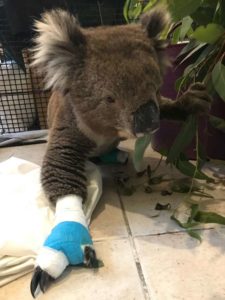