Sometimes animals can be so human that it is amazing! Not all people can realize their guilt and ask forgiveness for it, but animals can do it, because they are very responsive, honest and sincere in their feelings.

This Labrador is the best proof of animal humanity. He knows what he has done wrong, and he is very remorseful. His love for his owner is so strong that when he commits a prank, he asks forgiveness for it. 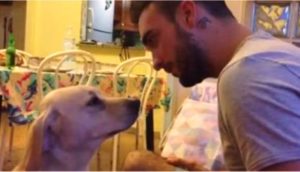 Ettore, a golden labrador puppy, had been naughty. His owner, Antonio, began to rebuke the dog. 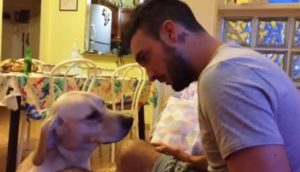 The dog immediately realized its fault when it heard the owner’s stern and loud voice. The pet, in order to earn his beloved owner’s forgiveness, jumped on his lap and dug his face into his chest. At the end of the video, the man gives the pet a gentle hug.