Dimka tried his best to survive on the street. He gave his paw to passersby, who gave him bread, as if to say thank you. The dog would sleep under the trucks. As soon as one of them was ready to go on a trip, Dimka would drag his cardboard and a few stripped bones under the neighboring car. One day the doggie didn’t react in time for the car to start the engine. Dimka was hurt. But there was no one around to take care of him and his wounds. He, as always, had to rely only on himself. 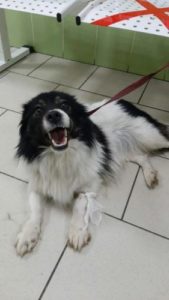 Sasha, one of the volunteers, saw the post about Dimka completely by accident. Sasha couldn’t understand why after all this time there was no place for the dog either in the shelters. The man immediately took Dimka to himself. Except he already had 40 dogs living at the temporary shelter. 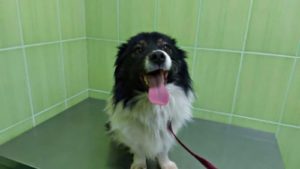 Despite the cramped conditions, Dimka was happy that he was no longer on the street. The dog turned out to be surprisingly kind and cheerful. He did not move a step away from Sasha and showed with all his might how grateful he was to him. Dimka turned out to be a fan of being scratched and every time he gave his paw in gratitude for any attention in his direction. Sasha immediately fell in love with his ward. But not all of the animals living with him took the same attitude toward Dimka:

“Some of my dogs didn’t accept him. Everyone tries to hurt him. I’m worried that the big dogs will drag him into the enclosure,” Sasha told me. 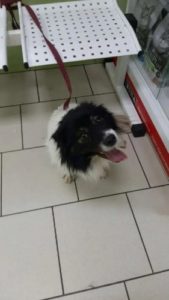 At that point I had not yet met Dimka, but I decided that I would try to help him. It would have been ideal to get Dimka into a pet hotel, but before that a vet’s examination would be necessary. 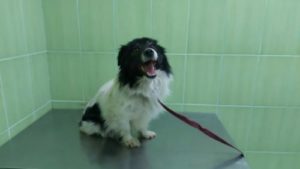 At the clinic, Dimka was examined and by the end of the visit this little doggy earned the affection of every staff member and every volunteer in the building. This little guy is smart. He loves communication and his eyes shine with so much kindness and happiness that it’s just impossible to resist. He responds to any attention with a smile. Dimka is small and well-mannered, he is just an ideal friend and can easily live in an apartment.