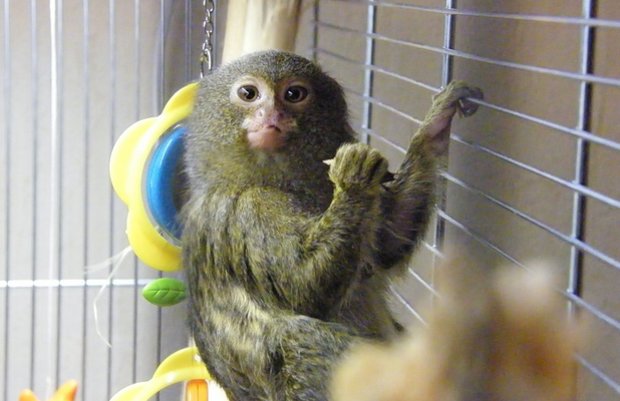 Exotic lovers often purchase rare animals as pets. The problem is that few of them are serious about creating the necessary conditions for animals. This situation was faced by employees of the British Society, which is engaged in the protection of animals.

Tiny, no bigger than a human palm and weighing only 100 grams, Tiktok is the baby of a rare marmoset monkey. He was rescued from a cage intended for keeping birds.

Animal rights activists were outraged that the baby was taken away from his mother for profit and sold to people who had no idea how to treat him. The employees went to the owners of the monkey after a call from a caring person, according to whom it became clear that marmoset was kept in unsuitable conditions and was too small for home maintenance.

According to experts, monkeys are not at all suitable for keeping in urban apartments. They are active and require competent, professional care. In addition, they are very social animals and do not tolerate separation from their relatives.

The Marmoset is the smallest of the monkeys. Therefore, their capture and export is prohibited. This fact made it possible to withdraw the animal from the owners. The fate of Tiktok was personally taken care of by the head of the society, Alison Cronin.

She came to pick up the baby and decided to place the monkey in a specialized shelter “World of Monkeys”, where a suitable pair of marmosets has already been found for him. Clydee and Ronnie also got into the shelter through the efforts of animal rights activists. The volunteers hoped that foster parents would be able to accept and love baby Tiktok.

Fortunately, everything turned out even better than people expected. The kid, at the sight of his relatives, let out a piercing scream and rushed to Clydee, immediately climbing on her back. The foster mother reacted to the cub as if he were her own.

Animal rights activists were relieved and delighted to see how new parents protect their baby and take care of him. By the way, Tiktok, who almost died from exhaustion, quickly recovered and now his everyday life in the family does not differ much from natural conditions.