A dog that refuses to leave his owner in the hospital follows the ambulance and then waits in front of the hospital door. The loyalty and faithfulness shown by the dog touched the medics.

This took place in Brazil in April 2022. Physician Igor Paiva Diaz and his colleagues were called to help a man suffering from an infection. The patient’s condition required that he be transported to the hospital for proper care. The scene the doctor and paramedics witnessed deeply shook them.

Mandragа, a German shepherd, watched with great interest as the paramedics carried his owner into the ambulance. And he refused to let him go alone! So Mandragа ran after the ambulance to the hospital.

According to hospital rules, pets are not allowed to stay in the hospital. So the faithful dog lay quietly at the front door, waiting for his owner to return. 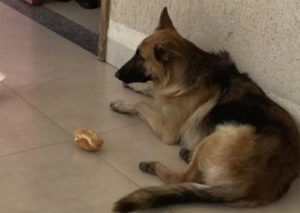 Touched by this overwhelming love, the medics made an unusual decision. When Mandraga’s owner’s health stabilized, the caregivers moved him outside the hospital. In this way, Mandraga and his owner were able to meet each other.

“As soon as the dog saw his owner on the stretcher, he immediately jumped up and started licking and kissing him,” said Dr. Igor Paiva. 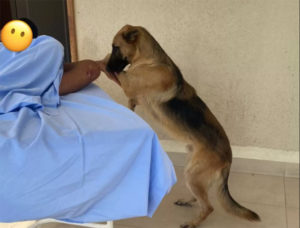 Fortunately, the patient’s condition quickly improved. Thus, he was able to return home within a few hours of being hospitalized. Again Mandraga followed the ambulance.

Dr. Diaz said he was very relieved to know that there was a faithful friend beside the man who supported him morally.