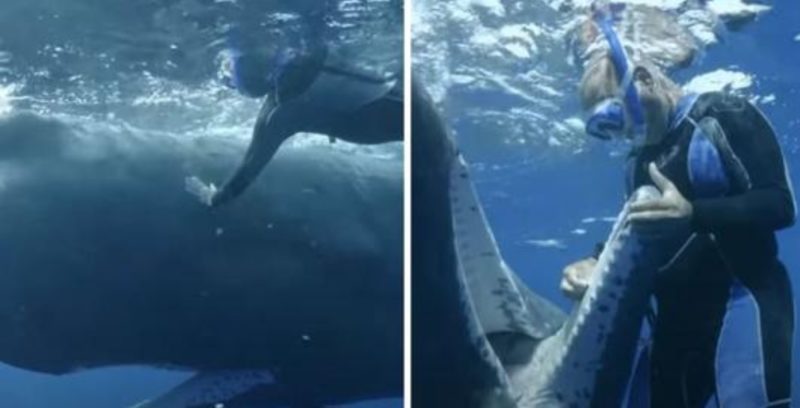 Sperm Whales are one of the most majestic and fascinating creatures on earth. They have the largest brain of any known animal living or extinct, and the brain can weigh up to 17 pounds. These intelligent creatures are deep divers but are sometimes seen at the surface.

One world-recognized diver, Hugues Vitry, helped a sperm whale that had a fishing hook stuck in its jaw. The whale swam up to Vitry and, in its own way, asked for him to help. Vitry studies the population of sperm whales in the Indian Ocean. Sperm whales migrate throughout the year and have a range that can span worldwide. There are whales that return to Vitry’s location every year and one that he has gotten to know for over a decade. Sperm whales are carnivorous and have large teeth. The fishing hook was at the base of one of the whale’s teeth stuck into the jaw. Right away, when the whale swam up to Vitry, he knew something was off. As the creature had its mouth wide open, but there was no squid around for it to eat. Then he noticed some blood coming from the whale’s mouth. Right away, he took a closer look. And the whale stayed calm the entire time he worked to get the hook out. Vitry needed to use great force. The whale did not move a muscle until it was all over. Vitry patted the animal on its head to reassure it that the hook was out. The whale lingered for a while and seemed to be thanking Vitry for his help by spinning in front of the diver.