The kitten was found in the middle of a busy road with cars speeding by. It was only by some miracle that the kitten was not hit by the wheels. He was very frightened and a random passerby rushed to help him. He carried the kitten out of the way, and then began to wonder where it might have come from.

“I knocked on the house closest to the road and asked if it was their cat. But it turned out it wasn’t. It later turned out that the kitten wasn’t domestic, it didn’t have a chip. I looked on local social media, but no one was looking for him. Then we decided that most likely a stray cat had kittens somewhere, and then one of them got lost and hit the road.” The man brought the kitten to his home with the intention of keeping it with him for a while and then finding it a new owner. The kitten was afraid of people and hid in dark corners the first day. And when he came out the next day, a domestic red cat took him into his care. He licked him and slept next to him, and the kitten felt safe around that cat. 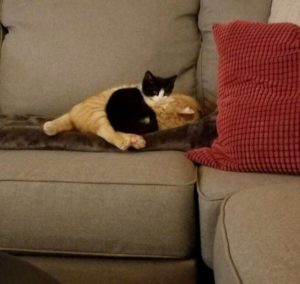 Very soon they became completely inseparable and the owner could not give the kitten to another family. In the meantime, the kitten made friends with the dog as well. 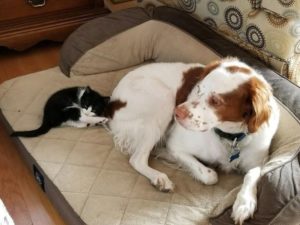 Now the foundling has grown a little, but he still sleeps next to the red cat. 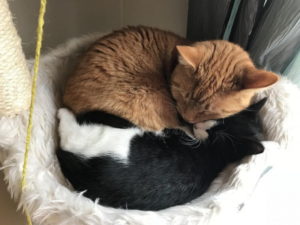