An American spotted a pregnant cat on the street. The animal seemed very cute to him, and he decided to help her and take her off the street. The color of the cat’s fur was unexpressive, looking like dirt, so the man named his new pet Earth. Unexpectedly the cat became a pet, and the man got a pet, and a few weeks later he got seven kittens as well. 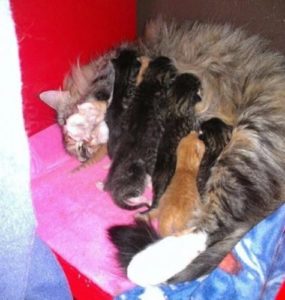 The new owner of Earth was very fond of animals, he already had a couple of dogs living at home. One of the tailed pets reacted to the appearance of kittens very unexpectedly: the dog felt like the father of the babies.

The dog took over the care of the babies, so that their mother had time to rest. The dog plays with the babies, lets them crawl on it, washes them and makes sure they don’t get spoiled. 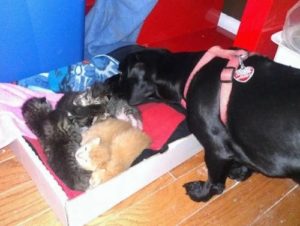 The dog acts very cute, but the funniest part is how the dog picks up around the house and brings the kittens, which are scattered to explore the rooms, to their mother’s crib. The dog carefully picks up the babies with his teeth and carries them to Earth, then makes sure they don’t get too far away from their mom. When the cat needs to rest, the dog carries the kittens to his owner, as if demanding that he should play with the babies, too. 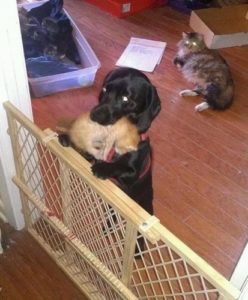 Earth doesn’t mind at all that the dog helps her. She trusts her friend and doesn’t worry about the little ones as long as he’s around, resting from his daily worries.