The stories of dogs who have served and parted from their people because of old age are always sad. And how beautiful the reunion of a cynologist and his ward looks.

For example, a German shepherd named Wangwang worked in China’s Henan province for eight years. In 2019, the animal grew old and retired. Of course, she found a new family willing to take care of the elderly dog. However, the pet had to part with her mentor. But not forever.

Recently a policeman, driving near the house where the sheepdog now lives, decided to visit her. A video of the meeting of old acquaintances recently appeared on Douyin, the Chinese version of TikTok. The footage shows the dog running out of the house, happily greeting her former mentor. She is so happy to see him that she immediately falls down at his feet and rubs herself against his shoes. 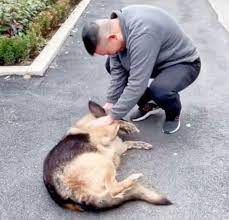 Unfortunately, the policeman could not stay long. When it was time to leave, he stroked his pet once more and moved toward the car. But it did not want to let him go, again and again blocked his way, petted and licked his hands. “It’s always hard to say goodbye,” the author of the post commented on the video. The man also noted that although Wangwang’s fur had begun to turn gray, she looked great. You can see that the dog is well fed, and with her retirement, she has recovered a little.

Social network users were very touched by the reaction of the animal. In the comments, many admitted to tears when looking at the footage of Wangwang’s meeting with the police officer.