One day a volunteer Yaroslav, who has 65 of our pets, called me and said: “I suggest you sit down if you’re standing up.” These words let me know that the news was definitely going to be bad. And that’s what happened.

In the morning, Yaroslav went out to the yard as usual to feed the dogs and noticed someone reaching under the fence with little white paws in an attempt to get an old bone. When the volunteer opened the gate, he was stunned by the picture in front of him. 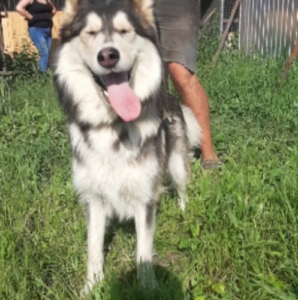 In front of his house, Yaroslav found a beautiful purebred dog tied up. It looked like a collie and a malamute at the same time. The man noticed that there was a piece of paper sticking out of the dog’s collar. The dog was not alone. Sitting next to her were two skinny white puppies that looked no more than two months old. They were looking at Yaroslav with curiosity. 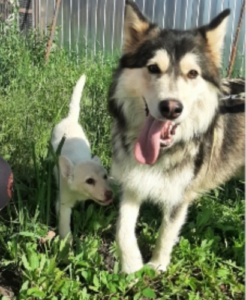 It was clear at once that the family was brought to this wilderness on purpose, and the owner was well aware of who lived in this house. Yaroslav stroked the good dog on the head, and he immediately laid down at his feet, showing that he had no more strength to sit under the hot sun. At that time, a piece of paper fell out of his collar, and the volunteer finally realized it was a note.

The note read, “Since I’m leaving, I’m giving the dogs to a shelter! Please don’t be discouraged.”

That is, this man could not take the pets with him, find new owners, or ask us to help him. He just decided to drop the animals off without making sure if we would take them or not.