The puppy was found in winter in the suburbs. He was completely blind from birth. This was most likely the reason why the baby was thrown on the garbage dump like garbage. The poor little lump, not even two months old, was waddling in the snow, trying to get out of the snowdrift. 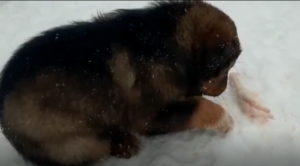 There he was discovered by a concerned man who always feeds the local homeless animals. He gave the puppy a chicken paw. Shivering from the cold, the little guy ate a treat he hadn’t seen and wagged his tail. 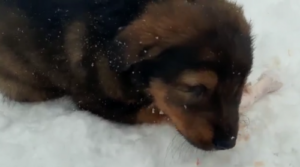 The man had business to attend to, so he had to leave. But the little dog never left his mind. So the kind man returned for it, but the puppy was not there. So the man thought someone had taken it for himself. Most likely it was so. However… 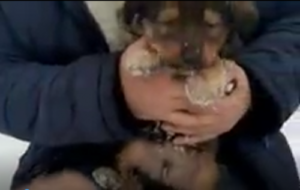 Several months had passed since that day.

In the bushes by a busy road during a thunderstorm, someone threw out a teenage puppy. It had a beautiful chocolate color. The poor dog was shivering from the cold, whimpering pitifully and clinging to the branches of the bushes, trying to figure out where he was. After all, he could not see anything, as he was blind. The man accidentally saw the baby and immediately recognized him.

— How is it, little one? Have you been thrown out again? — The man asked in surprise, stroking the puppy’s head. And the little dog raised his muzzle up, listening to the voice, and continued to whimper in response.

Then the man asked for volunteers to help. He felt very sorry for the puppy. However, he already has many pets at home, and he was worried that the blind baby would be abused. But he couldn’t leave him there either. After all, he could run out at any moment onto the roadway, where traffic is not regulated in any way. Cars drive at a very high speed. 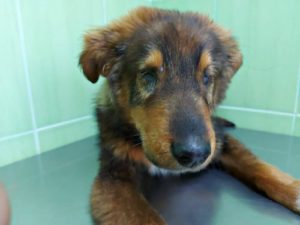 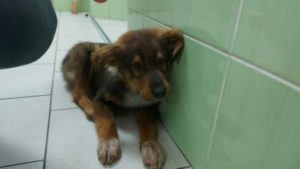 When I saw a skinny and absolutely helpless baby, I couldn’t do nothing. After all, no one would help but us. I dialed a man, afraid that the puppy wouldn’t live there until morning, and asked him to take him to my place until our girls arrived. The drive to the suburbs wasn’t that far from us.

Twins married twins surrounded by hundreds of other twins
«We knew the odds were unlikely, but marrying twins was very, very important to
LIFE STORIES 0 60