Carrie Long is used to caring for orphaned and injured fawns – she founded Texas Fawn and Friends, a nonprofit rehab center for these animals. The organization’s Web site has instructions on what to do if you find a lone baby deer, how to determine its condition and how to contact the center’s staff if it needs help. But last year, Long received a not-so-typical call from a Texas resident. A raccoon just two or three weeks old was in trouble, abandoned by its mother and sitting confused in a downpour.

It seemed that the little animal had negligible chance of rescue, and then a home came into his life where he was ready to be cared for.

“His eyes had just opened and he was just the cutest little guy in the world,” recalls Long, who named the foundling Jasper. 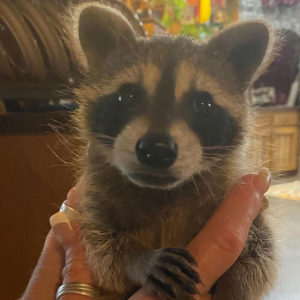 As the raccoon recovered and settled in, another new resident arrived at the orphanage: a little deer named Hope, who had lost her mother at a young age and was in need of attention and care. Jasper took an immediate interest in her and apparently realized that friendship would save them both from loneliness.

The raccoon proved to be extremely affectionate. He constantly sneaks up on the reindeer, wrapping his paws around her neck and sometimes trying to climb on her. Jasper seems to have so much love that he doesn’t know how to get it out. Long posted one of these videos on social media, and it has racked up more than 492,000 views.

“I posted this video to make anyone who sees it smile or laugh. It’s a tough world, and a little humor never hurt anyone!” – says the founder of the shelter. Some commenters thought Jasper and Hope’s relationship was very similar to the human model of family:

“This fawn shows us what it means to be patient with younger siblings.”