Real heroes are among us. It’s especially striking when strength of character and spirit is shown not by adults, but by children. So, in March, a 13-year-old St. Petersburg resident rescued a sinking dog from the Gulf of Finland, which could not get out onto the ice on its own. The brave pupil rushed to help the animal without hesitation. And at this time, a passerby just stood there and watched the incident, as an entertainment. A young boy was taking a walk in the park with his mother. They noticed a dog near the shore in the Gulf of Finland, which fell through the ice and made futile attempts to get out on dry land.

“Unfortunately, it could not do it on its own, was weakening and would have drowned in the end, if it was not for a 13-year-old schoolboy who was the only real man around,” said eyewitnesses in the social network.

People were passing by, looking at the drowning animal, but no one made any attempt to help. The brave boy rushed to the dog and quickly pulled him out onto the ice. Together with his mother he led the exhausted animal to the shore. A woman and her daughter ran up to them and offered to help, to take the four-legged dog to the veterinary clinic. 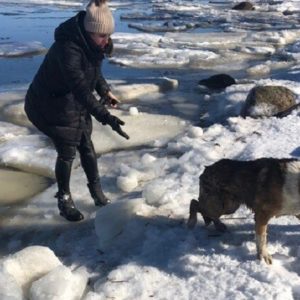 The doctors examined the dog – it turned out to be an old girl. The animal was in shock and had a cut on her paw, but overall she was fine. The dog is wearing a collar, but there is no address on it. There is also no chip. Therefore, to find the owners quickly failed.

The dog is currently at the shelter. After the accident, the dog has eaten and is sleeping. Animal rights activists are looking for old or new owners for the poor dog.