A tourist was resting quietly by the coast when a sea lion appeared nearby. The animal planned his vacation just as well: the cameras outside the hotel filmed the sea lion calmly swimming in the pool at first, and then simply took the lounge chair away from the bewildered man. 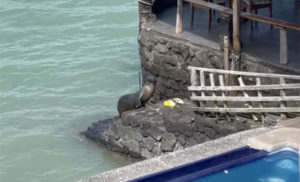 The Solimar Hotel is located on the coast of Puerto Ayora in the Galapagos Islands. Only well-to-do tourists can afford a vacation here. But even these people have to put up with the manners of the local animals.

A man who decided to take a relaxing break on a chaise lounge saw this for himself. He chose the earliest morning, when there were no neighbors or staff around. However, by that time the sea lion that lives nearby had already woken up. 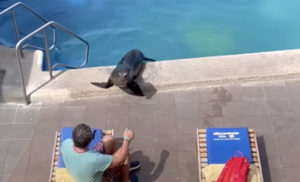 The animal climbed out of the ocean onto the beach as confidently as possible, then dove into the pool and swam several times underwater. The man watched the performance in amazement, but the main surprise awaited him later.

A sea lion came to the hotel not to swim, but to rest. He jumped out of the pool, quickly made his way to a lounge chair and forced a tourist to leave. 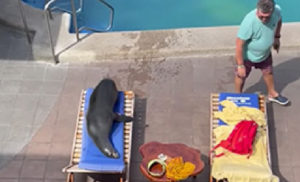 The cameras outside the hotel filmed everything that happened.

Apparently, this is not the first time this sea lion has pulled a stunt. At least none of the staff was even surprised by the unusual story.

These three twins were separated as children: they met 10 years later and found out that they had been involved in a special experiment
Twins have always been of particular interest to science. After all, on two, and
LIFE STORIES 0 7