We already know all the cats in the area, they are spayed and looked after. That’s why the appearance of a new cat was a surprise to us. We assume that she was recently domestic, but her owners chased her away to live on the street. 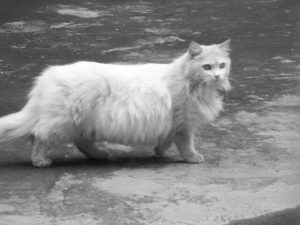 At first we doubted whether the cat was pregnant or not. Her belly was small, and she looked extremely confused and frightened. The cat did not know street life at all. She had almost jumped under the wheels of a car several times, throwing herself under the feet of passersby. Most likely, she had lived in a house before and had not yet adapted to roaming the streets.

We brought the cat to the shelter that evening and scheduled a visit to the doctor the next day. When we returned to the shelter in the morning, we saw that the cat had managed to become a mom that night. 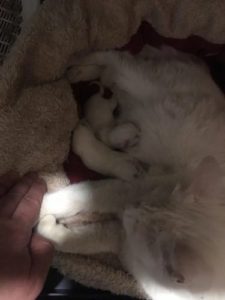 This situation came as a complete surprise to us. Of course, the appearance of kittens is a joyful event. Except that we hoped to the last that the cat was not pregnant. And now we had to take care not only of her, but also of her offspring. And finding new owners for our charges each time becomes more and more difficult. 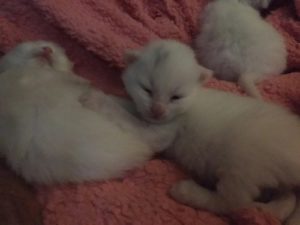 The babies are now two weeks old. They turned out to be perfectly healthy and growing quickly, becoming more and more independent. Very soon the babies will be able to go to their new families, but we haven’t found them yet. We hope that these cute, chubby kittens will be wanted, but we need to make sure they won’t become a toy to be thrown away as soon as they get bored. 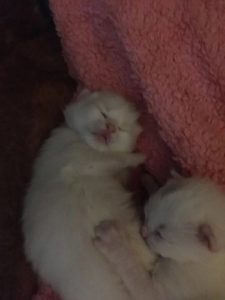 The cat turned out to be a great mom who makes sure her babies are fed, clean, and warm. Even when we let the cat out of her cage, she doesn’t go far from her babies, preferring to keep them in her sight.

Thus, we have four wards at once.