In the United States, a woman was helping her relative with repairs. While she was working, she suddenly heard a squeaking sound in the garden. The sound was very quiet, but the woman decided to check to see who was making it. Following the sound, the woman found a kitten in the bushes. The baby had only recently been born and had not even opened its eyes yet. 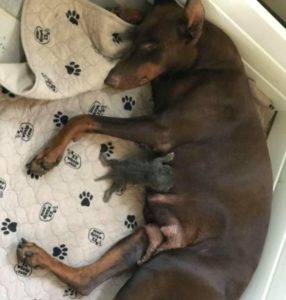 The woman left the baby where he was. After all, she thought his mother would come for him soon. Time passed, and the mother cat never returned. The baby continued to sit still and cry from hunger and cold. 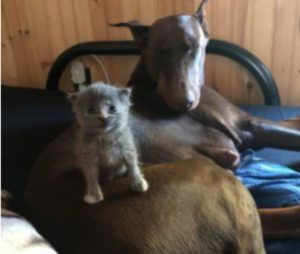 The woman realized that the baby needed help and took him from the garden to her home. The woman had a dog named Rocky at home. More recently, she had had babies. The woman was afraid that, protecting the puppies, Rocky would react aggressively to the kitten. But that’s not how it turned out. 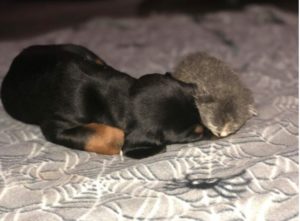 Rocky watched the kitten closely while she fed her babies. It turned out that the dog had previously helped feed a motherless rabbit and a motherless guinea pig. So she decided to help the kitten, too.

Rocky became the baby’s nurse. The dog’s owner posted cute pictures of the friendship between the dog and the kitten. 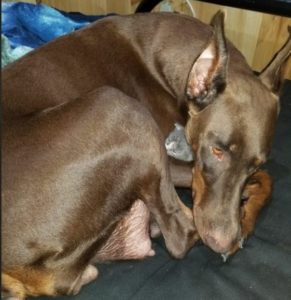 It’s been a couple of weeks. All the babies are getting stronger. They are very friendly and they all play together. Kitty is the smallest of the whole noisy company. So, like a real mom, Rocky takes special care of him.