There are so many different kinds of cats: bald, fluffy, short-haired, Siamese, Persian, Munchkins, etc. Most are probably familiar to you. But have you ever heard of the Lykoi breed of cat?

Meet Gracie, a Lykoi cat, sometimes also called a “werewolf cat.” Because their distinctive baldness makes them look a lot like the little werewolves from old horror movies. 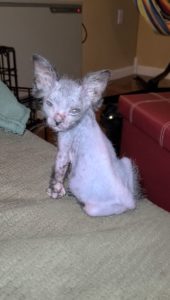 “I decided to help two homeless pregnant cats who were living together on the street,” said Gracie’s owner, named Bree from Maine, S.C.

“They both gave birth six days apart, after which they joined together as one family and began raising all 12 of their kittens together. They each took care of each other’s kittens as if they were their own,” the woman continued. 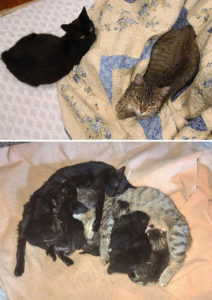 “I noticed that one of the kittens looked weaker than the others and was losing her fur. I immediately took her to the vet, who said it could have been due to a lot of stress. But otherwise the kitten was perfectly healthy.”

“I was very worried about the kitten. But she soon got better and her fur started to grow back.” 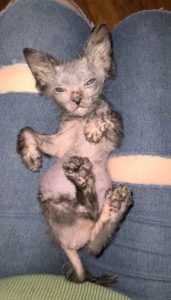 “When the fur began to grow back, I really couldn’t understand anything. The kitten looked so strange that it looked nothing like its siblings or its mother.” 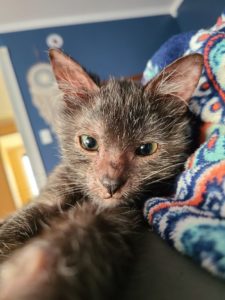 With a little research, Bree learned that Gracie is of the Lykoi breed.

Lykoi is a breed of cat that is the result of a natural mutation in the fur of the domestic short-haired cat. This mutation gives the animal an appearance similar to that of a werewolf from European mythology. 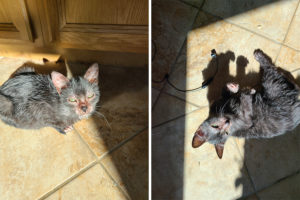 “What I like most about Gracie is that when she was a little bald baby, I loved kissing her and breathing in her scent. She has a certain scent that made me love to kiss her.”

The woman said that because of her unusual fur, Gracie molts much more often than most kittens. 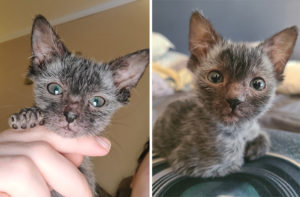 Bree said a little more about her cat:

“She’s doing great, and she’s in great health! She loves to nap and play! Her favorite toy is a laser pointer, and she can both chase the red dot and play with the pointer itself.”