Sometimes a cuddle is better than any medicine, especially if it’s feline. Andrew Fallon’s father was recovering from surgery when suddenly he had an unexpected visitor. The man’s wife had gone out of the house, leaving the door slightly ajar, and when she returned she saw her husband asleep with the cat in his arms. The most interesting thing about all this is that they don’t have any cat. When Andrew, the man’s son, entered the room, he was not too surprised to see his father sleeping in the armchair; after all, he was recovering, but for one small “detail”: his father had never owned a cat! After the surprising visit, the young man decided to take a picture of the tender moment between his father and – apparently – his new friend. In addition, during his sleep, the man ended up holding the kitten’s “hand”. 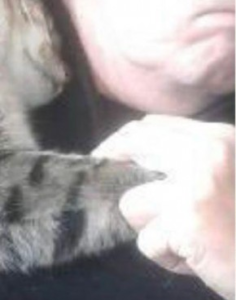 “My father is recovering from an operation. Mom went out and left the door ajar. PS: my parents don’t have a cat,” he tweeted.

The post has since circulated around the web, receiving many positive reactions and shares. “My dad was as surprised as anyone when mom woke him up,” Andrew explained.

Andrew’s parents later learned that the cat’s name was Ziggy. He is a friendly neighborhood feline, known to come into residents’ homes for a visit, some cuddles, and lots of purring. However, that day, his presence seemed like a true “pet therapy” service: cuddling and purring in the home to lift the spirits and health of an elderly convalescent.

“You never own a cat, it is the cat that owns you or claims you: animals are very intelligent and this animal understood that his father needed love,” wrote one user after seeing the images on Twitter. After his visit, in fact, the man recovered faster than expected. Great job, Ziggy

ANIMALS 0 14 views
His name is Boss and he looks the part. The Tibetan Mastiff dog from