After surviving two strokes, the spaniel was learning to move around the house. Already a couple of days after the stroke, the dog decided that he had recovered enough and tried to walk at least a couple of meters. Unfortunately, the attack was quite severe and it was difficult for the spaniel even to get to his feet, let alone climb the stairs. The dog’s favorite place was in the owner’s bedroom on the second floor. 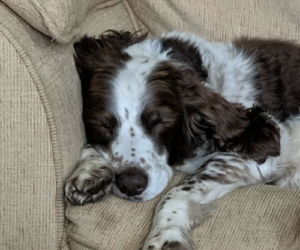 The head of the family came to the rescue and decided to take care of the dog. The owners blocked the stairs to stop the dog from climbing up and risking harm to his health. So a special gate appeared in front of the steps. 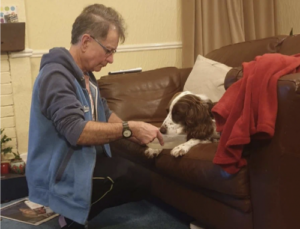 Leaving the animal downstairs to sleep alone at night was a pity for the family. After all, before his illness, the dog slept in the room with the owners. So the father of the family decided that all family members would take turns sleeping on the couch in the living room, so Spike felt that there were people who cared about him. The man’s wife and daughter approved of the plan. 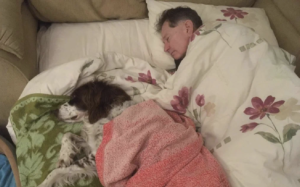 “When my dad created this schedule, I started a semester at university, so at first it was just my parents sleeping downstairs with Spike, once I got here I joined the schedule,” Catherine says.

The girl says her father adores dogs, and Spike is his best friend. Despite his schedule, the man spends almost every night in the living room with his dog, also trying to give him every free minute. 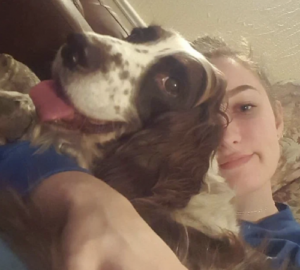