In the city of Tampon, on the island of Réunion, a man reported that a Staffordshire bull terrier dog was lying lifeless in the rain in the garden of a house.

The Association for the Education in Animal Welfare ( APEBA ) intervened without delay. When Caroline Baroche, president of the organization, arrived at the specified location, she saw the horrific picture.

“The dog was all wet and frozen. She couldn’t get up anymore. When I saw the look in her eyes, I just started crying,” she said.

The 9-year-old dog, named Lovely, apparently passed from owner to owner. Her last owner only visited her once a week and didn’t give her any food or drink. 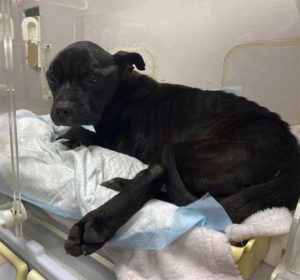 Lovely was immediately taken to the veterinary clinic. She was malnourished and cachectic. She only weighed 8 kilograms, when she should have weighed at least 15 kilograms.

So Lovely was placed in an incubator to rehydrate and provide the nutrients she so desperately needed.

“Without this rescue, she wouldn’t have survived the weekend. It’s a miracle,” Caroline said. 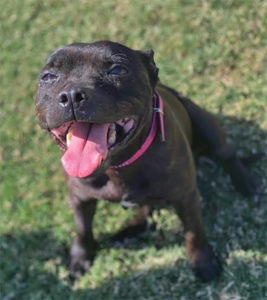 Fortunately, Lovely showed unprecedented resilience. Thanks to the daily attention of her rescuers, she recovered. Indeed, after several days in intensive care, she was able to join the shelter kennel, where she continued her remission.

“Her weight has now reached 16 kilograms. We are making good food for her. She is so greedy that we have to regulate it!” said Caroline.

Today, Lovely is ready to be welcomed into a loving home that will take care of her the way she deserves.

In the meantime, APEBA filed a complaint against the pet’s owner and the 30 Million Friends Foundation filed a civil suit. So the man will have to answer for his actions in court.