You don’t have to be too old to be a hero. And this 8-year-old boy is a perfect example. When his furry friend got sick, Bryson Kliemann didn’t hesitate to sell his collection of Pokemon cards to save the dog’s life.An incredible gesture that eventually paid off as the puppy’s life was saved thanks to his loyal buddy! Bryson has always loved animals, and he always wanted a puppy. But his family couldn’t afford it. But the boy’s dream eventually came true. In March 2021, they adopted Bruce, a cute 4–month-old Labrador crossbreed.

“My son had been asking for a dog for a really long time…,” mother Kimberly Woodruff told TODAY. “When we decided to buy our house, he knew this meant we could get a dog.And so he was very excited.” Bryson and his two other brothers were happier than ever. Bryson was most attached to Bruce. The two quickly became inseparable friends. But, unfortunately, a few weeks later the family found out that Bruce was very ill.As it turned out he contracted Parvo – an extremely dangerous virus.

Since the family had quite little money and the medical bills were very expensive (about $700), they feared the worst. But Bryson refused to give up on his best buddy, and came up with a plan to make money in order to save his life! “I told him Bruce was sick and said ‘When you get home today from school, he may be at the vet’s office or in heaven,” said Bryson’s mother.

But when Bryson came home from school, he told his parents that he would sell his rare Pokemon cards to help Bruce. So he set up a stand on the side of the road, near his home in Lebanon, Virginia, with the inscription: ’4Sale Pokemon’. The boy’s gesture brought his mother into tears.

“He’s such a sweet boy and loves to help people, but they’re his belongings,” she said.

“His Pokémon cards are his most prized possession, he’s been collecting them since he’s 4.” It didn’t take too long until everyone in the neighborhood learned about Bryson’s story, and all his neighbors rushed to help him. They didn’t just bought his cards, but some even offered him their cards to sell them and raise enough money to save his sick puppy. In less than three days, the selfless kid managed to raise nearly $400. But more was yet to come.

His mother decided to share a photo of him as sitting on the side of the road to sell his cards for this noble cause, and she created a GoFundMe page, thinking they might be able to reach their $800 goal. But Bryson’s inspiring story went straight to the people’s heart, and within days they got over $25,000 in donations. Thanks to his so devoted friend, Bruce’s life was saved. From the money collected, Woodruff pays other owners who cannot afford to pay the vet’s bills for their animals.

“I hope that this story will help people understand that there is still something good left in this world,” the woman said. “I am amazed by the uproar of support for a little boy and his dog in the small town of Lebanon, Virginia. Who would have thought?!” 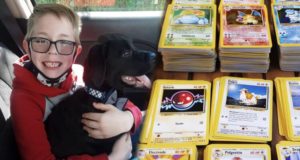