Hope For Paws received a call about an injured stray dog who needed help. When rescuers arrived on the scene, they found her lying outside one of the homes. She had been there for three weeks, waiting for someone to help her. 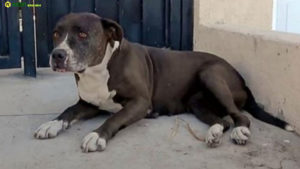 The rescuers gave her some food, which she gladly accepted. Then they put a leash on her. When she stood up, they saw that something was wrong with her back leg.

The dog, who was named Bluebell, wagged her tail and seemed relieved that someone was finally helping her. 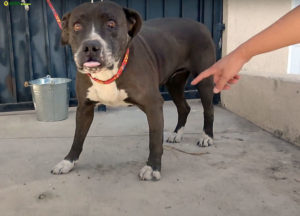 They brought her to the vet, where she was diagnosed with two forms of cancer, a mast cell tumor and an adenocarcinoma of the mammary gland. In addition to the cancer, she also had a very painful tooth abscess.

She was scanned for a microchip, but unfortunately, she didn’t have one.

It was time for a relaxing bath to help Bluebell feel better and wash away the week’s dirt from living on the streets. 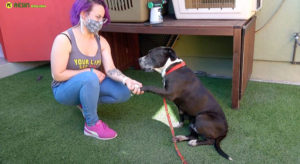 Bluebell underwent surgery to remove all the tumors. Fortunately, X-rays confirmed that the cancer had not spread.

When she got better, she went to live with a foster family through Lionel’s Legacy. She is now looking for a home of her own.