Jessica and Andy decided that they should get another pet. The couple went to the animal shelter to find a new kitty, since the animals there were in great need of a home and loving owners.

As they walked around the shelter and looked at the animals, one of the cats looked at them from its cage with a look of sadness. The girl wanted to comfort the cat and stroke it. As soon as the cat was in Jessica’s arms, he instantly put his paw around her neck and rested his head on her shoulder, showing how glad he was that she had decided to pet him. The cat hugged the girl and didn’t want to let her go at all. 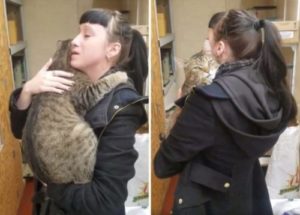 The shelter staff told us that their ward’s name is Clutch, and he ended up with them because of his character. The cat did not get along with other animals or small children, demanding that all the owners’ attention belong to him indiscriminately. Jessica and Andy had a little kitten at home, so they could not take an animal with such a complicated character, but also she could not leave Clutch without help. 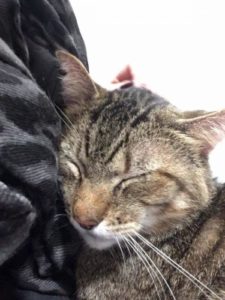 Jessica took some pictures of the cat and wrote a post about him, where she said that Clutch is very fond of cuddles. The touching pictures caused an enthusiastic reaction among Jessica’s followers and very soon the post went viral and Clutch became known to people who wanted to give him a home. 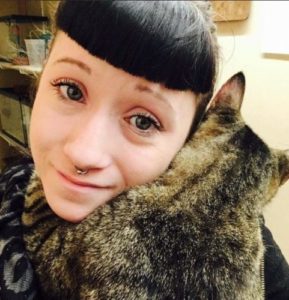 A few days later, a family came to the shelter for the cat, who were not intimidated by the animal’s complex nature. They took the cat home, where he will be the center of their attention. Clutch’s new owners are sure that once he is convinced that they really love him, his jealousy will subside and he will become more friendly to those around him.