An Australian pub owner repelled a crocodile attack with a frying pan and survived.

The everyday life of Australians never ceases to amaze, and this story proves it. Its hero – pub owner Kai Hansen drove a crocodile away from his establishment with a frying pan. The animal had come too close to the pub. And the man decided to chase it away, so it would not attack visitors. 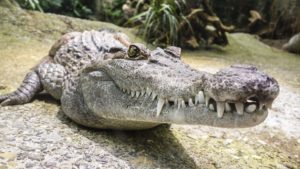 The man confidently struck the crocodile several times with the frying pan, which subdued the aggressive reptile. The “enemy” had no choice but to crawl back to the river. As it turned out, Kai was defending visitors to his pub. According to the hero, a crocodile came too close to the establishment and began to show aggression. So the Australian had to attack it. By the way, this is not Kai Hansen’s first battle with reptiles. In 2018, his dog was eaten by a three-meter crocodile, although the man desperately tried to save the pet. Kai admitted that he is not afraid of these large reptiles and reacts to them as to ordinary animals.