Funny and touching stories happen not only with pets. For example, the hero of this story is an orangutan who took care of little tiger cubs.

Born into a South Carolina wildlife refuge, the five tiger cubs became orphans almost immediately after being born. The cubs might never have known what a mother’s love was if the orangutan living there hadn’t come to their rescue and replaced their parents.

When the staff came to work one day, they saw the primate and the tiger cubs playing happily together. The orangutang was showing tenderness to the cubs, cradling them in his arms.

The staff found this picture very touching. So they helped an unusual foster parent. The orangutan was given a bottle of baby formula and shown how to feed them. Now the unusual daddy himself fed his adopted babies, who responded to such care with tenderness and love. 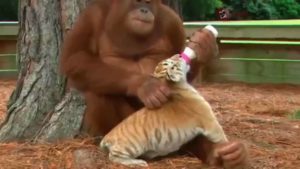 The primate got into the role of a father, so he was not only engaged in feeding, but also raising tiger cubs. This task was the most difficult for the primate to cope with. The tiger cubs turned out to be real fidgety cubs, often fighting with each other. The foster father spent a lot of time trying to separate the cubs and teach them some manners. The primate’s attempts to correct the tiger cubs’ behavior, for the most part, were fruitless. But the patience he showed could only be surprised.

When the tiger cubs became older, they were moved to a separate enclosure. Despite the sympathy that existed between the animals, it was difficult for predators to give up their instincts. Therefore, the tiger cubs began to pose a danger to the primate.

Despite this ending, this story is an example of how maternal and paternal feelings can violate even the harsh laws of nature and become the ground for the emergence of sympathy between animals of completely different species.