Some people love their pets unconditionally for better or worse, while some people adopt these animals just to entertain when they’re still strong and helpful and then dump them ruthlessly when they grow old and get weak. These cold-hearted people are unbelievable, but sadly they still exist everywhere in this world. 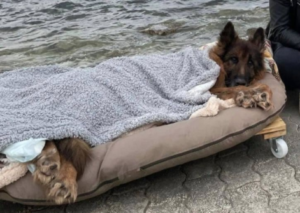 The German Shepherd in the story once had a family that he thought was his own until he grew old and became paralyzed. And they disposed of him like garbage. After they moved, the dog was left in the old house with countless health problems. When Gianna Serena Manfredi and other volunteers from the Qua La Zampa Association found him near Bitonto, Bari, Italy, they named the poor dog «Heart.» 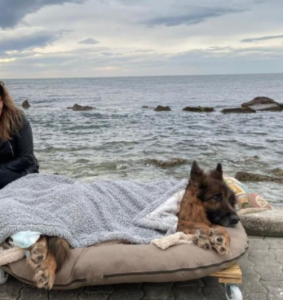 Heart was paralyzed and crawled up and down the street in search of food. At night, the furry animal returned to the home where he was left. It was a very difficult time for the boy. When they rescued him, the volunteers tried to get Heart moving again. They even used a wheelchair for a while, but the swelling in his spine got worse and worse. Gianna and some other women had formed a group named “The Remote Mothers” to take turns looking after the luckless dog, and Heart was so happy he found true love in the last days of his life. However, these days didn’t last forever. He could only stay with them for one year.
When his time was about to come, Gianna decided to accompany him on the last trip of his life to the sea. And it was absolutely fantastic. 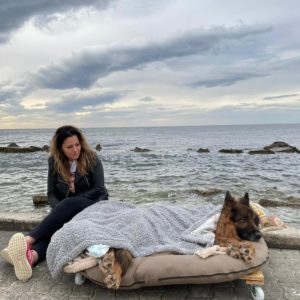 Gianna let the puppy get to know the sea and lay on her cushion to experience the purest and most relaxing wind.

Heart’s suffering at one point was unimaginable. But these flesh and blood angels did their best to help her forget. The little dog spent the end of his life rejoicing in the knowledge that there are real people in the world. Heart’s suffering is incredible, but Gianna confirmed that love can heal everything. 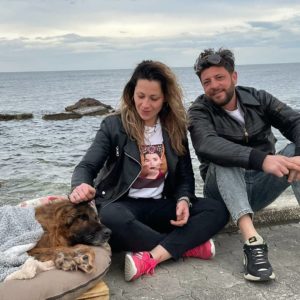 Heart passed away peacefully shortly afterward, knowing that he was loved and cherished. It was sad, but at least he went to a better world where he would never be neglected anymore. 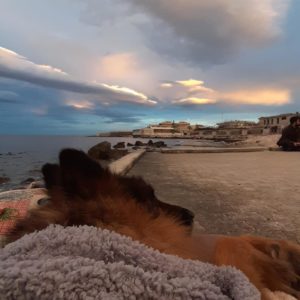 ANIMALS 0 5 views
On the way home with his son Toby, Davy Gallant, who lives in Quebec,

ANIMALS 0 6 views
This cat named Scooter lived with his owners for nine years, after which they

ANIMALS 0 54 views
Alina drove home after work, but there was no joy, only irritation. The promotion,

A little girl helps her old neighbor to climb a hill, the next day, he takes all the neighbors with him to thank her
«Harper, get off the fence, honey! You’re going to hurt yourself!», Samantha called to
LIFE STORIES 0 19

A guy jumped into cold water to save a little boy
It was a cold autumn day. Vitaly was taking a walk with his girlfriend
LIFE STORIES 0 34

Barley turned into a gorgeous cat literally from a skeleton
On the way home with his son Toby, Davy Gallant, who lives in Quebec,
ANIMALS 0 5

A boy is the only one to attend his grandmother’s funeral, despite her disinheriting him
Dorothy Hanks loved being around her grandchildren. Like all grandparents, she also wanted the
LIFE STORIES 0 14