Animal shelter volunteers come in many forms, but few are like Terry. The retiree devotes all of his free time to the Safe Haven pet shelter in Green Bay, Wisconsin, USA. The shelter recently shared touching photos of Terry napping with several kitties on the couch. The pictures show the cats enjoying his cuddles and using the volunteer as their own large pillow. 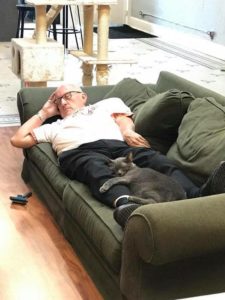 While sleeping on the job is usually frowned upon, Safe Haven is grateful to Terry for this opportunity to socialize the cats.

“We’re lucky to have someone like Terry,” they explained.

“Terry came to the shelter one day and introduced himself. He said he wanted to take care of the cats – like brushing them. Eventually, it started happening every day. He brushes all the cats and can tell you all their likes and dislikes. He also happens to fall asleep…almost every day. We don’t mind – cats need it! Terry is a wonderful volunteer.” 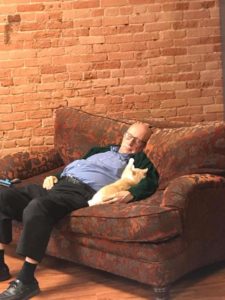 Safe Haven opened its doors in December 2016 as a nonprofit shelter for cats with disabilities and special needs – cats that regular shelters wouldn’t fit. Safe Haven has no cages, and the interior looks like someone’s living room.

“So we arranged everything so that the cats would feel psychologically comfortable and get used to living in the house.” 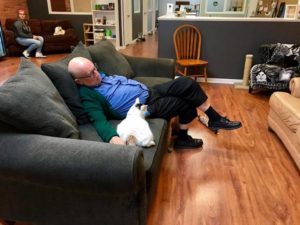 “I’ve always liked cats,” Terry admits. “But I never had any. When I retired, I decided to do something fun and rewarding, and this place came along. I’ve volunteered at other shelters as well, but this place is special because there are no cages and the cats can feel human care in a friendly environment.”

To this day, Terry comes to the shelter daily, takes care of the cats and… sometimes accidentally falls asleep there. And the cats really don’t mind that kind of neighborliness!