This cat named Scooter lived with his owners for nine years, after which they decided to get rid of him.

The fact was that he had lost one eye and the other was so infected that it was impossible for the vets to save him. He would probably have been put to sleep if the Delaware shelter had not agreed to take him in.

The cat underwent surgery to save his life. After that, the shelter hoped to find a new home for him. However, older cats, even sighted ones, have a hard time finding owners, so it seemed that Scooter didn’t stand a chance. 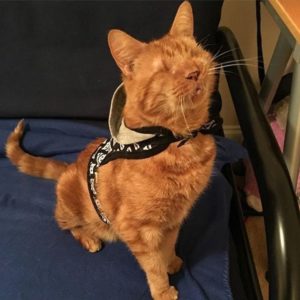 However, things turned out differently. When Annie Tennyson saw his picture on the Internet and read his story, she was immediately drawn to him. The next day she went to see him at the shelter. According to her, he curled up in a ball right in her lap and stayed with her the entire time. To the girl he turned out to be just the kind of cat she wanted, and she decided to take him for herself.

Afterwards, she and her friends took Scooter to pick out a new bed and toys. Despite not being able to see, Scooter was quick to adjust to his new life at home with Tennyson.

“It took him about two days to get the layout of of my apartment,” she said. “He still hits a few walls every now and then, especially when he comes running to greet me when I get home.”

Despite his lack of sight, he has quickly adjusted to his life in his new home. He still sometimes hits the walls, especially when he runs out to meet his owner when she comes home, but, she notes, Scooter feels her: he always follows her unmistakably, settles on her lap, sleeps next to her on her bed. She notes that cats with disabilities are the most loving of all, as they especially need affection… More than just learning his way around to avoid obstacles, however, Scooter’s blindness hasn’t prevented him from always finding the perfect spot alongside his new friend.

“I cannot do anything without him being right next to me,” Tennyson said. “He jumps up on my bed every night and falls asleep next to me. Anytime I go sit on the sofa, he comes and finds me. I think he can sense when I’m in the room. He comes and sits on my lap every single day.” 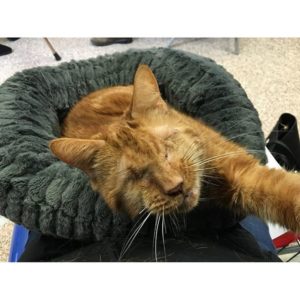 Although some people might see older pets or those with disabilities as being less desirable companions than younger, abler ones, Tennyson says Scooter is proof that quite the opposite is true.

“I think that special needs cats are the most loving cats. They know that they need extra love,” she said. “When you take a special needs cat into your house, it’ll be the best decision you could ever make.”