When these group of friends decided to make a trip through the Canadian wilderness, they never thought they will end up saving a crying baby moose. Nonetheless, when they noticed the tiny animal stuck between rocks, they rushed to help her. After some efforts, they managed to save the helpless creature and then reunited her with her mother. 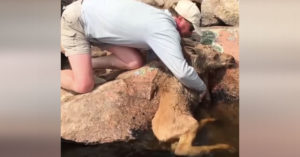 These kind people were boating on a river in Ontario, Canada, when all of a sudden they spotted a newborn baby moose lying on some rocks at the edge of the water. With the mother moose nearby, it was clear for the men the calf might get trapped or something, so they approached her to investigate. Soon as they reached the spot, one of the men got off the boat and tried to set the poor tiny animal free. But he soon noticed had animal’s leg stuck between the rocks. The calf was too heavy for the man to lift her all by himself. Therefore two other men joined their efforts and thankfully, they eventually managed to set the baby moose free. But freeing the tiny animal wasn’t enough. The baby moose was too young and weak to get to her mom alone. So the rescuers carried her in their arms all they way through the sharp rocks until they have reached safe land. The baby moose was eventually reunited with her concerned mother.

This innocent tiny soul was saved, thanks to these heroes. They are true animal lovers! Watch the heartwarming rescue here! “Four guys rescuing a baby moose left behind by its mother,” the video description reads. “The baby moose was taken to the mainland and released there. No injury or harm was done to the moose!”