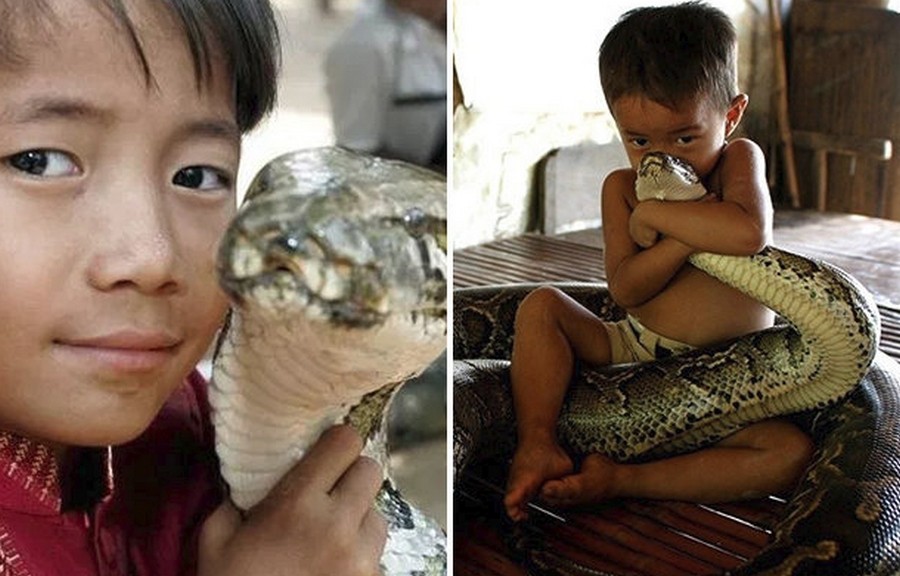 Cambodia is a mysterious country with its own way of life, different worldview and traditions. We cannot imagine a huge snake as a beloved pet, even in a dream.A 5-meter python has been living in a Cambodian family for many years.

There are 42 species of snakes living in Cambodia and it is not surprising that some of them sometimes crawl into human dwellings. For the local kids, they are of considerable interest. After all, it’s fun to play with a toy that moves and crawls away.

This is exactly the story that happened in the Sambat family. One day the owner found a python at home, but did not kill it, but simply took it to the forest. What was the surprise of the owner when he saw this particular snake in his house the next day! The man just didn’t give up, he once again sent the python into the jungle. But when he found it in the room again a day later, he decided not to fight fate anymore and just left it as a pet.

Little Warne, the son of the owner, made friends with the Chamreun python, so the snake was named. The three-year-old baby literally crawled on the reptile, pulled the tail, slept on it, and the python endured everything for some reason and never did anything threatening to the boy’s life. Its dimensions are amazing: it weighs more than a hundred kilograms and is longer than five meters. It costs nothing to swallow a small child for such a giant, but for several years the family has been living with a python without incident.

People are used to the snake and cherish it as the mascot of the Masbat family, which brings good luck, health and prosperity.