In 2014, Lisa left her cat with friends in the Parakivai Valley near Wangamata, just 15 minutes from her home. After two days, Pipi ran away. Lisa never found him, despite numerous attempts to find him.

“We always drove slowly around the place where he got lost, but to no avail,” Lisa said.

She had already lost hope of ever seeing him again, and her daughter, then 6 years old, was devastated. Lisa admitted she never recovered from the ordeal. 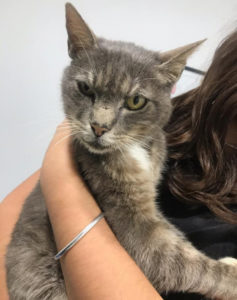 On June 8, 2022, there was a dramatic turn of events. Lisa was contacted by a local veterinarian:

“Did you lose your cat? He was found today,” he told her.
Lisa could not believe her ears. She returned to her desk, unable to think about anything but the news she had just heard.

More surprisingly, Pipi had been picked up in her hometown. The unfortunate cat remained trapped for eight weeks in a barn with enough water to survive. Then he walked the 14 kilometers of woods that separated him from his home. 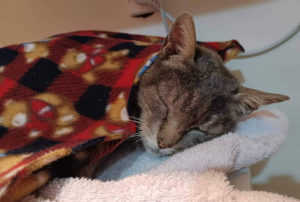 So Lisa and her daughter went as quickly as possible to meet their cat. He recognized them immediately.

“I said to him, ‘Oh my God, P! I haven’t seen you in eight years! He started meowing and snuggling at our feet,” explained the tear-struck owner.

According to the vet, all these years Pipi had to be taken care of by someone because of his physical condition. Lisa lamented that no one took her cat to the vet earlier. That way, thanks to his microchip, she would have been able to find him a long time ago.